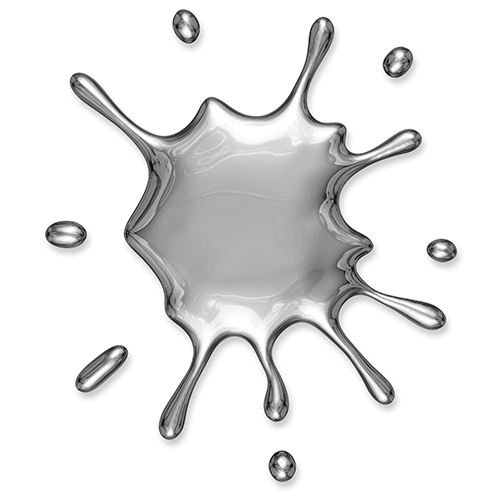 Mercury is a metallic element that is naturally occurring in the environment. Mercury can have several forms but is most often recognized as a shiny, silver-white, dense liquid.

Metallic mercury finds many uses including in thermometers, electrical switches, dental amalgams and some industrial manufacturing. In addition to metallic (liquid) mercury, the element can exist in combination with other elements to form compounds. Mercury compounds are the most common form that exists naturally in the environment. Mercury is generally found at low levels throughout the environment in rocks, sediments, water, and soils; however scientists have also found some mineral occurrences and thermal springs that are naturally high in mercury. Most of the human exposures occur from levels of mercury in the environment. We are routinely exposed in the food we eat, and to a lesser degree, the air we breathe and the water we drink. Most exposures are due to unavoidable natural occurrence of mercury compounds in the soil. The FDA limit of 1 part-per-million of mercury allowed in most cosmetics does not present a risk to health. The trace level of mercury that FDA allows for use some eye care preparations is too small to be of concern for health reasons but is sufficient to prevent bacterial contamination of the eye care product and serious eye infections in the users of the eye care product. FDA banned mercury in most cosmetics in 1974. The FDA has determined that mercury compounds may be used in cosmetic products only in trace amounts as a preservative  in certain eye-area products when no equally safe and effective alternative is available for use in such products.

The toxicity of mercury and its compounds is extensively documented in scientific literature. Some mercury compounds can be absorbed through the skin on topical application and accumulate in the body. Depending on the form of mercury, exposure to sufficiently high concentrations can result in allergic reactions, skin irritation, or neurotoxicity. Chronic exposure and accumulation to mercury compounds can result in a variety of symptoms and adverse reactions including nervousness, irritability, tremors, weakness, fatigue, memory loss, changes in hearing, vision and taste, nausea, vomiting, diarrhea, kidney damage, and, at high levels, death. Mercury is particularly hazardous during fetal development and is readily absorbed by the skin.