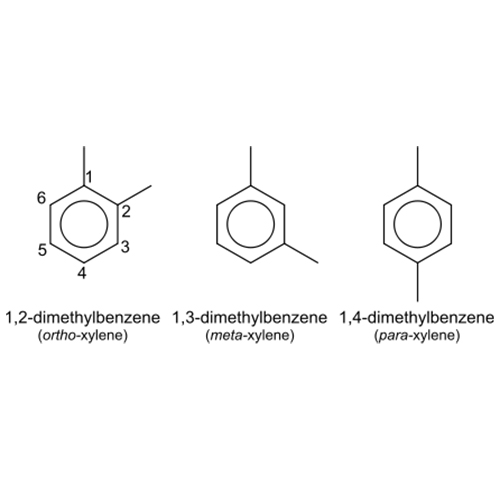 A xylene is an aromatic hydrocarbon consisting of a benzene ring with two methyl substituents. The xylenes are major petrochemicals, produced by catalytic reforming and also by coal carbonisation in the manufacture of coke fuel. Xylene is used as a solvent in the printing, rubber, paint and leather industries. It is found in small amounts in airplane fuel, gasoline and cigarette smoke. In the cosmetics industry it is used as a fragrance ingredient and solvent.

Xylene is one of the top 30 chemicals produced in the United States in terms of volume. It is primarily used as a solvent, a liquid that can dissolve other substances. Along with other solvents, xylene is also widely used as a cleaning agent. Xylene is used, to a lesser extent, as a material in the chemical, plastics, and synthetic fiber industries and as an ingredient in the coating of fabrics and papers. Isomers of xylene are used in the manufacture of certain polymers (chemical compounds), such as plastics. Besides occupational exposure, the principal pathway of human contact is via soil contamination from leaking underground storage tanks containing petroleum products. Xylene can leak into the soil, surface water or ground water where it may remain for months or more before it breaks down into other chemicals.

If inhaled it can cause irritation of the nose and throat, neausea, vomiting, and gastric dicomfort. Acute exposure an cause eye irritation, and neurological effects such as impaired short term memory, impaired reaction time, and alterations in equilibrium and body balance. can cause skin irritation. Acute animal studies have shown  respiratory, cardiovascular, CNS, liver, and kidney effects from inhalation exposure to mixed xylenes. Chronic exposure of humans to mixed xylenes, as seen in occupational settings, has resulted primarily in neurological effects such as headache, dizziness, fatigue, tremors, incoordination, anxiety, impaired short-term memory, and inability to concentrate.  Labored breathing, impaired pulmonary function, increased heart palpitation, severe chest pain, abnormal EKG, and possible effects on the kidneys have also been reported. Mixed xylenes have been shown to produce developmental effects, such as an increased incidence of skeletal variations in fetuses, delayed ossification, fetal resorptions, and decreased fetal body weight in animals via inhalation exposure.  Some studies observed maternal toxicity as well. No information is available on the carcinogenic effects of mixed xylenes in humans.