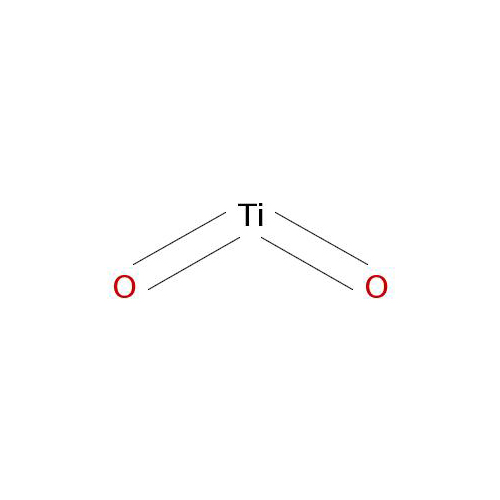 Titanium dioxide, also known as titanium(IV) oxide or titania, is the naturally occurring oxide of titanium. Titanium dioxide has recently been classified by the International Agency for Research on Cancer (IARC) as an IARC Group 2B carcinogen ''possibly carcinogen to humans''. Titanium dioxide accounts for 70% of the total production volume of pigments worldwide. It is widely used to provide whiteness and opacity to products such as paints, plastics, papers, inks, foods, and toothpastes. It is also used in cosmetic and skin care products, and it is present in almost every sunblock, where it helps protect the skin from ultraviolet light.

Titanium dioxide is listed as a safe pigment, with no known adverse effects when used in cosmetics, and approved by the FDA when 99% pure. It is not listed as a carcinogen, mutagen, teratogen, comedogen, toxin or as a trigger for contact dermatitis in any other safety regulatory publications beside the NIOSH (Antczak, 2001; Physical & Theoretical Chemical Laboratory, Oxford University respectively), with the exception of the recent IARC designation(1). It is reasonable to conclude then, that titanium dioxide is not a cancer-causing substance unless exposure is beyond safe limits during manufacturing using this substance. It is considered safe for use in foods, drugs, paints and cosmetics. A study by Churg et. al. at the University of British Columbia in their paper "Induction of Fibrogenic Mediators by Fine and Ultrafine Titanium Dioxide in Rat Tracheal** Explants" (1999) found that ultrafine* particles of the anatase form of titanium dioxide, which are less than 0.1 microns, are pathogenic or disease causing (2).  Ultrafine (nanoparticle) is listed at less than .1 microns or 100 nanometres.

Many Titanium Dioxides are not made using nano-particles and unless you are standing next to the particle powder without a particle mask while it is being manufactured or mixed in a tank, you should not worry.  In finished products, the benefit is outstanding if you want to avoid chemical sunscreens or whiten teeth without chemicals.  Read your labels and ask if your cosmetics, sunscreens or toothpaste are made using nano particles (Ultrafine) which can absorb into the skin.  Coarse or fine particles are effective and safe.

** Intratracheal administration is an exposure procedure that introduces the material directly into the lungs via the trachea, bypassing protective mechanisms in the respiratory system.