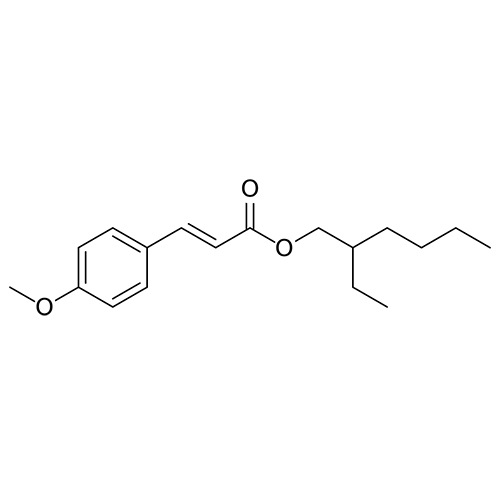 An organic compound that is an ingredient in some sunscreens and lip balms as a UV absorber/filter. It is an ester formed frommethoxycinnamic acid and (RS)-2-ethylhexanol. It is a clear liquid that is insoluble in water. Its primary use is in sunscreens and other cosmetics to absorb UV-B rays from the sun, protecting the skin from damage. It is also used to reduce the appearance of scars.

Octyl methocycinnamate can be found in hair color products and shampoos, sunscreen, lipstick, nail polish, skin creams. A recent study concluded that octyl methoxycinnamate and other sun screening agents do not penetrate the outer skin in sufficient concentration to cause any significant toxicity to the underlying human keratinocytes. Estrogenic effects were noted in laboratory animals at concentrations close to those experienced by sunscreen users and were also shown in test tube experiments. A study published in 2011 explored the effects of pre- and post-natal exposure to high doses of octyl methoxycinnamate in rats and showed, for example, that the testes weight and testosterone levels were significantly reduced in male rats. This common sunscreen ingredient is shown to have hormone-mimicking effects on laboratory animals. This chemical is found in humans, including mothers' milk samples.  Octyl methoxycinnamate is one of the most frequently used chemical UV filters worldwide and has been reported to cause photosensitisation and photoallergic effects. Octyl methoxycinnamate easily penetrates the upper layer of the skin and, when exposed to UV radiation, generates free radicals in skin cells.