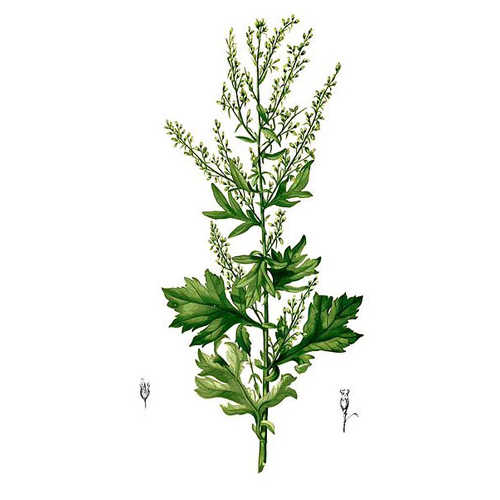 Mugwort is a perennial plant that is a member of the daisy family and a relative of ragweed. It is native to Asia and Europe and now grows as a weed in North America. It can grow to 6 feet tall, with stalks of small reddish-brown or yellow flowers in summer. The dried leaves and roots of the plant are used in herbal remedies. Mugwort should not be confused with St. John's Wort (Hypericum perforatum) or wormwood (Artemisia absinthium), despite their similar names.

It is slightly toxic, however, and should never be used by pregnant women, especially in their first trimester, since it can cause a miscarriage. Large, prolonged dosage can damage the nervous system. All parts of the plant are anthelmintic, antiseptic, antispasmodic, carminative, cholagogue, diaphoretic, digestive, emmenagogue, expectorant, nervine, purgative, stimulant, slightly tonic and used in the treatment of women's complaints. The leaves are also said to be appetizer, diuretic, haemostatic and stomachic. They can be used internally or externally. An infusion of the leaves and flowering tops is used in the treatment of nervous and spasmodic affections, sterility, functional bleeding of the uterus, dysmenorrhoea, asthma and diseases of the brain.