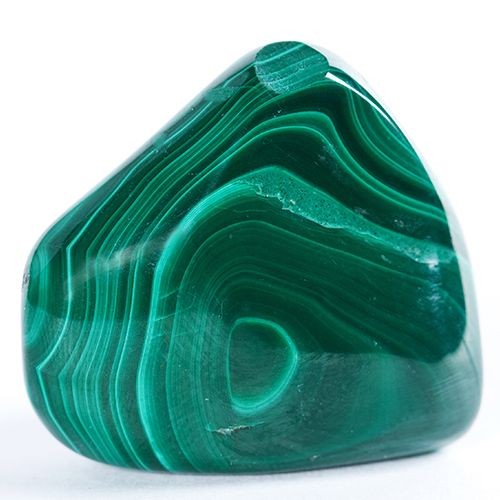 Malachite is a copper carbonate hydroxide mineral, with the formula Cu2CO3(OH)2. This opaque, green banded mineral crystallizes in themonoclinic crystal system, and most often forms botryoidal, fibrous, orstalagmitic masses, in fractures and spaces, deep underground, where the water table and hydrothermal fluids provide the means for chemical precipitation.

Malachite is often confused with Malachite Green Chloride or Leucomalachite. Malachite Green chloride is a dye/pigment and is only called malachite because of its color.  It contains NO actual Malachite, it is a chloride salt. Malachite green is prepared by the condensation of benzaldehyde and dimethylaniline. This dye/pigment is a cancer concern.

Why Malachite may be safe:

Real Malachite (Copper) Extract is not a cancer concern.

Researchers at Duke Medicine have found a way to kill prostate cancer cells by delivering a trove of copper along with a drug that selectively destroys the diseased cells brimming with the mineral, leaving non-cancer cells healthy.

Adults have 50 and 80 milligrams (mg) of copper in their body, mostly in muscle and the liver. Copper helps make melanin, bone, and connective tissue, and helps with many other processes in your body. You normally get copper through your diet, in foods like organ meats, especially liver; seafood; beans; and whole grains. You get rid of copper in your bowel movements and urine.

As with any mineral, too much is not a good thing, but our bodies need minerals to function & thrive.

Why Malachite Green Chloride (dye) may not be safe:

For each study we mixed the dye into the feed of rats and mice. The doses of malachite green chloride given were 100, 300, or 600 parts per million (ppm) for female rats and 100, 225, or 450 ppm for female mice. Doses of leucomalachite green were 91, 272, or 543 ppm for male and female rats and 91, 204, or 408 ppm for female mice. There were 48 animals in each dose group. Control animals received the same feed with no chemical added. The study lasted for two years. Tissues from more than 40 sites were examined for every animal.