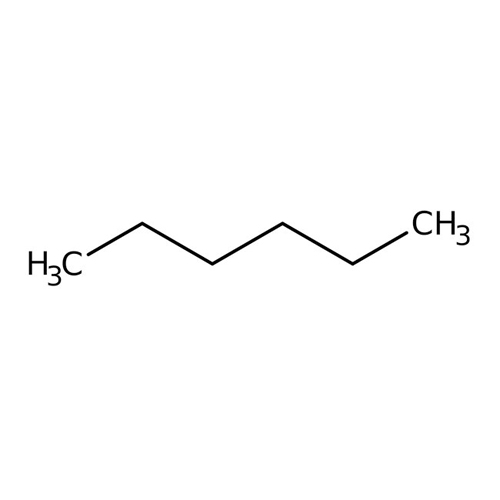 Hexane is used to extract edible oils from seeds and vegetables, as a special-use solvent, and as a cleaning agent.  Acute (short-term) inhalation exposure of humans to high levels of hexane causes mild central nervous system (CNS) effects, including dizziness, giddiness, slight nausea, and headache.  Chronic (longterm) exposure to hexane in air is associated with polyneuropathy in humans, with numbness in the extremities, muscular weakness, blurred vision, headache, and fatigue observed.  Neurotoxic effects have also been exhibited in rats.  No information is available on the carcinogenic effects of hexane in humans or animals.  EPA has classified hexane as a Group D, not classifiable as to human carcinogenicity.

Commercial grades of hexane are used as solvents for glues (rubber cement, adhesives), varnishes, and inks.
Hexane is also used as a cleaning agent (degreaser) in the printing industry.
Hexane is used as the liquid in low temperature thermometers.

The most probable route of human exposure to hexane is by inhalation. Individuals are most likely to be exposed to hexane in the workplace.

Acute Effects: Acute inhalation exposure of humans to high levels of hexane causes mild CNS depression. CNS effects include dizziness, giddiness, slight nausea, and headache in humans. (1-3)
Acute exposure to hexane vapors may cause dermatitis and irritation of the eyes and throat in humans. (2)
Acute animal tests in rats have demonstrated hexane to have low acute toxicity from inhalation and ingestion exposure. (4)

Chronic inhalation exposure to hexane is associated with sensorimotor polyneuropathy in humans, with Chronic inhalation exposure to hexane is associated with sensorimotor polyneuropathy in humans, with numbness in the extremities, muscular weakness, blurred vision, headache, and fatigue observed. (1,2,5-7)
Rats, chronically exposed by inhalation, have exhibited neurotoxic effects. (5,6)
Mild inflammatory, erosive, and degenerative lesions in the olfactory and respiratory epithelium of the nasal cavity have been observed in mice chronically exposed by inhalation.  Pulmonary lesions have also been observed in chronically exposed rabbits. (5,6)
The Reference Concentration (RfC) for hexane is 0.2 milligrams per cubic meter (mg/m 3 ) based on neurotoxicity in humans and epithelial lesions in the nasal cavity in mice. The RfC is an estimate (with uncertainty spanning perhaps an order of magnitude) of a continuous inhalation exposure to the human population (including sensitive subgroups) that is likely to be without appreciable risk of deleterious noncancer effects during a lifetime.  It is not a direct estimator of risk but rather a reference point to gauge the potential effects.  At exposures increasingly greater than the RfC, the potential for adverse health effects increases.  Lifetime exposure above the RfC does not imply that an adverse health effect would necessarily occur. (5)
EPA has medium confidence in the epidemiological study on which the RfC was based because the lowestobserved-adverse-effect level (LOAEL) in this study was based on neurotoxicology, and this endpoint is supported by numerous other subchronic inhalation studies in animals and by human occupational studies; medium confidence in the database because of the lack of long-term inhalation studies and appropriate reproductive studies; and, consequently, medium confidence in the RfC. (5)
EPA has not established a Reference Dose (RfD) for hexane. (5)
EPA has calculated a provisional RfD of 0.06 milligrams per kilogram body weight per day (mg/kg/d) based on neurological and reproductive effects in rats.  The provisional RfD is a value that has had some form of Agency review but is not on IRIS. (10)

No information is available on the reproductive or developmental effects of hexane in humans.
Testicular damage has been observed in male rats exposed to hexane via inhalation. (5)
Teratogenic effects were not observed in the offspring of rats chronically exposed via inhalation in several studies. (3,5,8)

No information is available on the carcinogenic effects of hexane in humans or animals.
EPA has classified hexane as a Group D, not classifiable as to human carcinogenicity, based on a lack of data concerning carcinogenicity in humans and animals. (3,5)