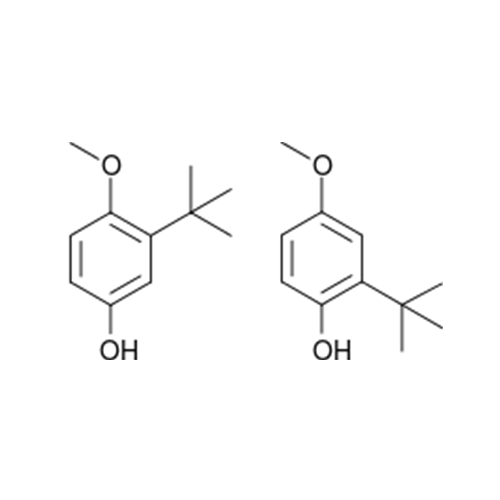 BHA (butylated hydroxyanisole) is an antioxidant, preservative, and stabilizer. It is also a fragrance ingredient used in masking other smells.

BHT is a toluene-base ingredient that is used as a preservative in both food and personal care products. U.S. National Toxicology Program, a part of the National Institutes of Health, has classified BHA as "reasonably anticipated to be a human carcinogen" based on evidence of carcinogenicity in experimental animals.  The European Commission on Endocrine Disruption has determined that there is strong evidence that BHA is a human endocrine disruptor, and has banned its use in cosmetics. The European Commission classified BHA as a known human toxicant on the EU Banned and Restricted Fragrances list, and the Environment Canada Domestic Substance List has classified BHA as a high human health priority. A study carried out in normal mammalian kidney cells found that exposure to BHA caused specific damage at the cellular level and was found to exert a significant cytotoxic effect even at low doses. The Environment Canada Domestic Substance List has classified BHT as expected to be toxic or harmful. A safety assessment of BHT reported that BHT applied to the skin of rats was associated with toxic effects in lung tissue, but judged that the low concentrations used in cosmetics were safe. Developmental and reproductive toxicity studies carried out in rats found that exposure to high doses of BHA resulted in weak dysfunction and underdevelopment of the reproductive systems of both male and female rats. Changes in testosterone levels, sex weight organs and sexual maturation were also observed. One or more human case studies show significant or allergenic effects. There is evidence that certain persons may have difficulty metabolizing BHA and BHT, resulting in health and behavior changes.

It is used in a wide range of cosmetics, foods, and pharmaceuticals. BHA is a preservative, and you can find it in potato chips, lard, butter, cereal, instant mashed potatoes,preserved meat, beer, baked goods, dry beverage and dessert mixes, chewing gum, and other foods as well as rubber, petroleum products, and, of course, wax food packaging. BHA also is commonly used in medicines, such as isotretinoin, lovastatin, and simvastatin, among others. Routes of human exposure are through inhalation, ingestion, and dermal contact. Dermal contact comes from it use in cosmetics as an antioxidant, especially in lipsticks and eyeshadow. BHA is an antioxidant in some rubbers and petroleum products and as a stabilizerfor vitamin A. Workers potentially are exposed to BHA in certain industries including food producers, animal feed producers, livestock producers, cosmetic manufacturers, some peroleum workers, and rubber producers and those who handle the end products, such as tires. Fast food service personnel who normally cook and serve fried and oily food are potentially exposed to BHA in high levels. BHA is volitile at 302 to 338 degrees ferenheit and is gassed into the air through steam.