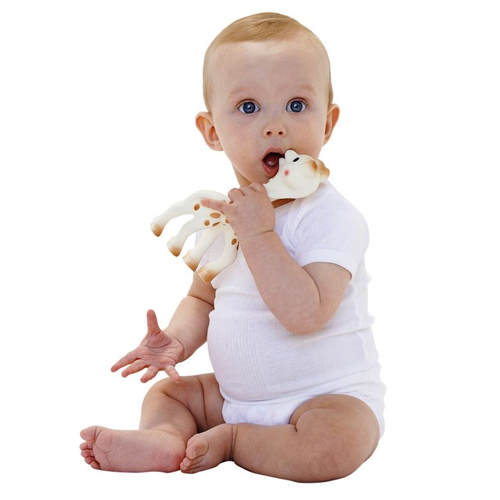 WARNING: Your Baby’s Sophie the Giraffe Toy Might Be Full of Mold

There may be no more popular gift for new parents than Sophie La Girafe, aka Sophie the Giraffe. Created and sold by French toy manufacturer Vulli, the popular teether toy has been the go-to choice for many parents since it first hit the market in 1961. However, a recent discovery has left one parent alarmed, and others asking a lot of questions. Pediatric dentist Dana Chianese’s two young boys were both fond of their Sophie the Giraffes, but when she attempted to clean the toy recently she made a startling revelation. She found upon inspection what could only be described as “a science experiment living inside…" Mrs. Chianese made it clear she followed the manufacturer’s instructions when cleaning her toddler’s teether stating that “she always cleaned the toy according to instructions, using hot, soapy water with a damp sponge and never submerging it into water.” Her findings have caused her to not only cease purchasing the toy for her own children, but she’s also no longer recommending it to the parents of her patients. The makers of Sophie the Giraffe have done their best to get ahead of the story though. Shortly after the troubling news broke, they released a statement that read:

“First of all, it's important to know that Sophie la Girafe [Sophie the Giraffe] is composed of 100% natural rubber, so the cleaning instructions have to be carefully respected. As indicated on the packaging and in an explanatory leaflet inside the packaging, we recommend to clean the surface of Sophie la Girafe with a damp cloth. It should not be immersed in the water nor rinsed off, to prevent water from getting inside, as she may become damaged. We thus would like to emphasize on the fact that is it important, while cleaning the product that no water gets inside the whole. As of now, we have not been contacted by Mrs. Chianese nor Mrs. Opera and were not aware of the situation before reading your article. It is thus difficult for us to comment on the current situation, as we haven't had the chance to examine the products. Please know that each complaint received is taken very seriously and that the return of the product is always asked for further examination. Furthermore, please know that the safety of children and satisfaction of their parents is our main priority. For the past 55 years, we have always strived to exceed security standards and all of our products comply with the most stringent global standards.”

To learn more about the concerns over mold inside Sophie La Giraffe, click here: http://bit.ly/2j2rT91